The First Entry Into Jerusalem The First Entry
Into Jerusalem

Jesus raised Lazareth from among the dead and the word spread of the mighty miracle. From that day forward the chief priests and Pharisees took council and conspired how they might put him to death. Then Jesus enters a crowded Jerusalem where the people took palm branches and cried Hosanna, Blessed is the King of Israel that comes in the name of the Lord.


During the final week of Jesus Christ’s earthly life he made a “ Triumphant Entry” into Jerusalem that is known as Palm Sunday. The dictionary describes triumphant as: achieving victory; feeling or expressing jubilation after having won a victory. In order to understand what the jubilation among the people was all about we have to go back before he entered into Jerusalem.

John 11:1-53
Now a certain man was sick, named Lazarus, of Bethany, the town of Mary and her sister Martha. . Therefore his sisters sent unto him, saying, Lord, behold, he whom thou lovest is sick. When Jesus heard that, he said, This sickness is not unto death, but for the glory of God, that the Son of God might be glorified thereby.

God had a special purpose for this dark moment.

After that he saith unto them, Our friend Lazarus sleepeth, but I go, that I may awake him out of sleep. Then said his disciples, Lord, if he sleep, he shall do well. Howbeit Jesus spake of his death, but they thought that he had spoken of taking of rest in sleep. Then said Jesus unto them plainly, Lazarus is dead.

…nevertheless let us go unto him. Then when Jesus came, he found that he had lain in the grave four days already.

Jesus had raised from the dead before but not after four days.

And many of the Jews came …

A crowd was building.

Then said Martha unto Jesus, Lord, if thou hadst been here, my brother had not died. But I know, that even now, whatsoever thou wilt ask of God, God will give it thee. Jesus saith unto her, Thy brother shall rise again.

Jesus could see the future because God gave him the revelation. He was a prophet.

Martha saith unto him, I know that he shall rise again in the resurrection at the last day.

Even Martha knew that the dead are dead until the resurrection.

Jesus said unto her, I am the resurrection, and the life: he that believeth in me, though he were dead, yet shall he live. And whosoever liveth and believeth in me shall never die. Believest thou this? She saith unto him, Yea, Lord: I believe that thou art the Christ, the Son of God, which should come into the world.

She went as far as to believe in him to be not only a prophet but the Messiah of God. But she could not quite grasp “ I am the resurrection, you will never die if you believe in me.” Her world was about to change.

Then when Mary was come where Jesus was, and saw him, she fell down at his feet, saying unto him, Lord, if thou hadst been here, my brother had not died. When Jesus therefore saw her weeping, and the Jews also weeping which came with her, he groaned in the spirit, and was troubled, Jesus therefore again groaning in himself cometh to the grave. It was a cave, and a stone lay upon it. Jesus said, Take ye away the stone. Martha, the sister of him that was dead, saith unto him, Lord, by this time he stinketh: for he hath been dead four days. Jesus saith unto her, Said I not unto thee, that, if thou wouldest believe, thou shouldest see the glory of God?


Jesus did not come right away because something mighty and greater was to happen than healing a man while he was sick. The glory of God was about to be witnessed and magnified by the power of his resurrection life unto Lazarus. Foreshadowing the glory and resurrection of Jesus Christ. It was the sign of all signs.

Then they took away the stone from the place where the dead was laid. And Jesus lifted up his eyes, and said, Father, I thank thee that thou hast heard me. And I knew that thou hearest me always: but because of the people which stand by I said it, that they may believe that thou hast sent me.

Proving he was the Christ, the Messiah of God. This was God’s purpose.

And when he thus had spoken, he cried with a loud voice, Lazarus, come forth. And he that was dead came forth, bound hand and foot with grave clothes: and his face was bound about with a napkin. Jesus saith unto them, Loose him, and let him go. Then many of the Jews which came to Mary, and had seen the things which Jesus did, believed on him. But some of them went their ways to the Pharisees, and told them what things Jesus had done. Then gathered the chief priests and the Pharisees a council, and said, What do we? for this man doeth many miracles(signs).

Jesus had performed many miracles but this was a sign (vs 47: “this man does many signs” is in most translations). What did the people now believe? That he was telling the truth, that he was the Messiah.

If we let him thus alone, all men will believe on him: and the Romans shall come and take away both our place and nation. Then from that day forth they took counsel together for to put him to death.

John 12:9,10
The Jews knew that he was there (in Bethany)…they came not for Jesus sake only but to see Lazarus…whom he had raised from among the dead. Because of Lazarus many more believed and went away (spread the word).

The word was spread of this mighty miracle and sign that Jesus was the Messiah. It also just happened to be near Passover so Jerusalem was crowded. Now the stage was set for his first entry into Jerusalem and why it was Triumphant. They had found their Messiah and King.
Now let’s determine when he made his first entry.

John 12:1
Then Jesus six days before the passover came to Bethany, where Lazarus had been dead, whom he raised from the dead. There they made him a supper; and Martha served; and Lazarus was one of them that sat at the table.

Six days before passover would make it the 14th of Nissan, being a Thursday that year. *

This is the first day after John tells us in verse one that it was six days before the passover. The passover is on the 14th** so backing up would make the next day of verse 12 the 9th of Nisan and our Final Week Calender would make it Friday, the 9th of Nisan. It was not Palm Sunday as traditionally taught.

12;13….many people who had come to the feast were waiting for Jesus because they heard he was coming.They took branches of palm trees and went forth to meet him and cried, Hosanna, Blessed is the King of Israel that cometh in the name of the Lord.

John 12:17,18,19,20
The people who were with him when he called Lazarus out of the grave and raised him from the among the dead gave witness that this was true and for this reason the people crowded around him giving honor that he had done this mighty miracle. But the Pharisees said look, the whole world is gone after him. Even the Gentiles were there at the feast desiring of the apostles to see him.

Mark19:35-38
And they brought the colt to Jesus and they cast there garments up and set Jesus on the colt spreading their clothes along the way.
And when he was come near at the descent at the mount of olives the whole multitude of the disciples began to rejoice and praise God with a loud voice for all the mighty works that they had seen, saying, Blessed Be the King that cometh in the name of the Lord:peace in heaven and glory to the highest.

Mark 11:7-11
And they brought the colt to Jesus and cast their garments on him and he sat upon him.And many spread their garments in the way and others cut down branches off the trees and spread them in the way. And they that went in front and behind cried Hosanna, Blessed is he that cometh in the name of the Lord. And Jesus entered into Jerusalem, and into the temple…and when he had looked around about upon all things, he went out to Bethany with the twelve for it was near evening time.

This marks the historic and Triumphant First Entry into Jerusalem. Jesus Christ was hailed King and Messiah and their was much joy in the city. His raising Lazarus from the grave was the great PR that opened the gates with hailing crowds. He taught in the temple and walked among the people without being threatened or harmed as times before while in Jerusalem. However, he left that night to sleep in Bethany with his disciples and prepared to enter Jerusalem the following day , a Second Entry , the 10th of Nisan, when the Passover Lamb would be selected and set apart by the priest. Little did the world know, the Lamb of God would also be selected, the temple rocked and Jerusalem judged.

One last major significance to this record. It marked the beginning of the end of the Jewish civilization and ancestry.

Luke 19:41 And when Jesus was come near (Jerusalem), he beheld the city and wept over it.

This 'wept' is in the text closer to a deep wailing. He wailed as he overlook the city from the Mount of Olives. Why? Because his heart was torn for Jerusalem when he saw by revelation of her destruction:

Luke 19:42-43 If thou had known, even thou, at least in this thy day, the things which belong unto thy peace! But now they are hid from thine eyes. For the days shall come upon thee, that thine enemies shall cast a trench about thee, and compass thee around, , and keep thee on every side. And shall lay thee even unto the ground, and thy children ; and they shall not leave thee one stone upon another; because thou knew not the time of visitation.

This is their utter demise geographically, culturally, religiously, and their civilization.

From the New Living Translation: 42 “How I wish today that you of all people would understand the way to peace. But now it is too late, and peace is hidden from your eyes. 43 Before long your enemies will build ramparts against your walls and encircle you and close in on you from every side. 44 They will crush you into the ground, and your children with you. Your enemies will not leave a single stone in place, because you did not recognize it when God visited you.[a]”

This was also prophesied in other areas of the scriptures, yet this day it was established as the final judgement*** by the Son of God. There would be no turning back. The clock for the existence of Israel was ticking down. It was also the beginning of the most historical week of destiny upon mankind the world would ever experience!

This is part 1 of the 3 part series "The Two Entries and the Extinction of the Jews."


*See "The Day Christ Died." By determining what day he died and arose, counting backwards can determine the days of the week. See calendar below.
* *The preparation for the Passover began on the 14th of Nissan. Numbers 9:5; Also the slaying of the lamb. See Calendar below.
*** visitation is episkope in Greek meaning as inspection; judgement 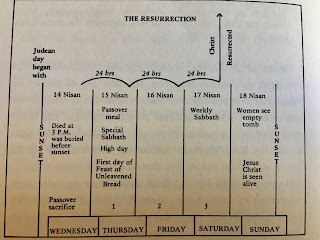 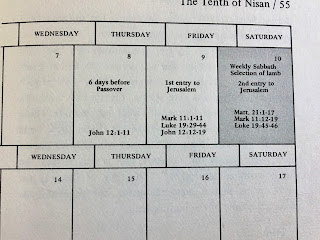