In The Dark Of Night 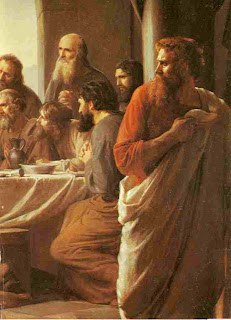 Judas Witnessed The Resurrection
As the supper ended, Satan put into the heart of Judas to betray Jesus and he went out into the dark of night.


Matt 27:5
And he cast down the pieces of silver in the temple, and departed, and went and hanged himself.

Peter describes it this way:
Acts 1:18
Now this man purchased a field with the reward of iniquity; and falling headlong, he burst asunder in the midst, and all his bowels gushed out.

These two verses paint a different picture of how he died and what happened prior. However, it’s the time of death we are concerned with here.
Why didn’t Jesus replace Judas himself? He had 40 days with his apostles during his resurrection appearance to do so. Peter stood up and announced they (the 11 remaining apostles) were going to cast a vote to replace Judas in order to fulfill what was written in Psalms. (His office or position must another replace). Jesus knew this scripture. The reason Jesus did not replace Judas himself was because Judas was still alive. Most probable up until the day of ascension.
Let’s go back to the beginning to see how they were chosen. Matthew and Mark indicate a rather random approach:

Matthew 4
18. And Jesus, walking by the sea of Galilee, saw two brethren, Simon called Peter, and Andrew his brother, casting a net into the sea: for they were fishers.
19. And he saith unto them, Follow me, and I will make you fishers of men.
20. And they straightway left their nets, and followed him.
21. And going on from thence, he saw other two brethren, James the son of Zebedee, and John his brother, in a ship with Zebedee their father, mending their nets; and he called them.
22. And they immediately left the ship and their father, and followed him.

Mark 1
16. Now as he walked by the sea of Galilee, he saw Simon and Andrew his brother casting a net into the sea: for they were fishers.
17. And Jesus said unto them, Come ye after me, and I will make you to become fishers of men.
18. And straightway they forsook their nets, and followed him.
19. And when he had gone a little further thence, he saw James the son of Zebedee, and John his brother, who also were in the ship mending their nets.
20. And straightway he called them: and they left their father Zebedee in the ship with the hired servants, and went after him.

Wow. If someone revealed to me a secret known only to me then foretold I would see heaven open and the angels of God, I would follow him.

At this point they were still called disciples. A disciple is a follower but an Apostle is an empowered gift ministry ordained of God. An Apostle is one who gives new light to that generation by revelation from God and in demonstration of power.
It is in Luke where we read the depth and true method of how Jesus selected the “ chosen twelve” out from among the disciples by praying all night until dawn when God gave him the names.

LUKE: 6
12. And it came to pass in those days, that he went out into a mountain to pray, and continued all night in prayer to God.
13. And when it was day, he called unto him his disciples: and of them he chose twelve, whom also he named apostles;
14. Simon, (whom he also named Peter,) and Andrew his brother, James and John, Philip and Bartholomew,
15. Matthew and Thomas, James the son of Alphaeus, and Simon called Zelotes,
16. And Judas the brother of James, and Judas Iscariot, which also was the traitor.

This indicates that the Twelve Apostles were carefully selected from among the disciples according to the will of God.

The following in Mark adds more detail to choosing The Twelve.
Mark 3
13. And he goeth up into a mountain, and calleth unto him whom he would: and they came unto him.
14. And he ordained twelve, that they should be with him, and that he might send them forth to preach,
15. And to have power to heal sicknesses, and to cast out devils.

According to this record they were chosen for two reasons. 'To Be with him ' and to be 'sent forth and preach and heal " with power.
Jesus spent all night in prayer in order to chose and name the 12 apostles from among the disciples. From that day forward they were known as “the twelve”, “the chosen”, “the Apostles.”
Jesus also spent a good deal of time teaching and training them. This is one reason he would've replaced Judas during the forty day period.
If choosing the original 12 was the result of such intense prayer by our lord and savior seeking divine guidance from God, then why did not Jesus himself replace Judas the same way during the 40 days he was among them in his resurrected body? It's because it was not necessary yet. Judas, being one of "The Twelve", was alive with them up until the Ascension
There was no need to replace him . It wasn't until Christ Ascended and was gone did Judas kill himself . Thus the timing of his replacement fits. Matthew merely collapses time pertaining to his death.*
Returning to choosing the apostles we learn he was always numbered with THE TWELVE.
Matthew 26
14. Then one of the twelve, called Judas Iscariot, went unto the chief priests,
Matthew 26
20. Now when the even was come, he sat down with the twelve.
Matt 26:47 Judas, one of the twelve
Mark 14:10 And Judas Iscariot, one of the twelve, went unto the chief priests, to betray him unto them.
Mark 14:43 Judas, one of the twelve
Mark 14:20 Judas, one of the twelve
Luke 22:3 Then entered Satan into Judas surnamed Iscariot, being of the number of twelve.
22:14 the twelve apostle.

Paul gives us the original witnesses of the resurrection of Jesus Christ.
1 Corinthians 15:5
…he was seen of Peter then of the twelve (Judas). Judas was alive and witnessed his resurrection appearance

:7 …then of all the apostles. Again, Judas was there.

When Peter stood up to replace Judas after the ascension he said “ for he was numbered with us and had obtained part of this ministry.” Somewhere between the time of the day of ascension and the day Peter took a vote to ordain a replacement, Judas killed himself.

Matt 28:16; Luke 24:33 and Mark 16;14 all mention Jesus appearing to the eleven in his resurrected body. Tradition assumes the missing apostle was Judas but God’s word has checks and balances. John 20:24 reveals that the missing apostle was Thomas.
Matt, Mark and Luke all use 'collapsing time summary' to end their gospel. Even though 40 days had elapsed during that time and many other things happened as mentioned in John. It merely collapses time into a few brief sentences in order to emphasize Christ’s great commission and glorious ascension.

Same principle regarding the short sentence describing the end of Judas’ life in the gospels. God magnified with great detail the crucifixion and death of his son Jesus Christ but described Judas' pitiful ending in one brief collapsed time summary. God’s word says a lot by limiting his demise and the end of a chosen man's life to one sentence.

I believe Luke tells us in Acts the time of Judas' separation from the Apostles.

Acts 1: 2
...Jesus through holy spirit had given commandments to the apostles whom he had chosen, to whom he also presented himself alive after his suffering by many infallible proofs, being seen by them during forty days and speaking of the things pertaining to the kingdom of God.

He did not replace Judas.

Jesus then gave them more instructions and teaching then when he ascended it says:
in verse 9-11: Now when he had spoken these things , while they watched, he was taken up and a cloud received him out of their sight. And while they looked steadfastly toward heaven (Judas departs) behold, two men in white apparel (angels) said "You men of Galilee"...

Judas was the only one of the chosen twelve who was not a Galilean. The angels spoke truly and in detail manner to the remaining eleven of the return of Christ.

Judas had time to return the money to the temple, witness the resurrection appearances, purchase a plot for his grave with the money of iniquity (what he stole from the bag) and slip away on the day of ascension to kill himself. This tormented soul repented, confessed he'd sinned and that he had betrayed the innocent blood. Yet Jesus says of the one who betrayed him “ better had he never been born”


*Of all the parallel events written in the four gospels, Matthew is the most often out of chronological order. It's not a mistake, still being the true word of God, however just told differently.
Posted by Vivid Images at 5:52 PM