The Woman At The Well 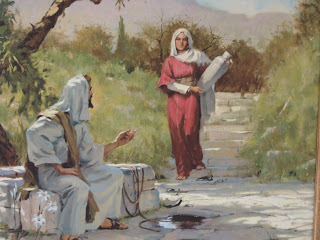 Give me this living water that I may not thirst again.

The wonderful truths revealed in the story of the woman at the well have been overshadowed by the misconception from western culture that she was a woman of bad reputation.

A Samaritan woman approaches Jacob's well to draw water and Jesus asks her for a drink. The conversation turns from a question over Jewish custom to deeper spiritual matters that reveal he's no ordinary man and she's a woman of destiny.

John 4: 9
..."How is it that you, being a Jew, ask a drink from me, a Samaritan woman?" for the Jews have no dealings with the Samaritans.

Jesus proceeds to go beyond this cultural class barrier and test her spiritual thirst.

John 4: 10
" If you knew the gift of God and who it is that says to you 'Give me a drink' you would have asked Him and He would've given you living water."

The gift of God was eternal life and the living water was holy spirit which was to come shortly in the future. He that spoke to her was currently the Messiah, the savior of God's people, which the Jews and even the Samaritans looked to his coming.

John 4: 11-12
"Sir, you have nothing to draw with and the well is deep. From where is this living water? Are you greater than our father Jacob who gave us this well and drank from himself, and his children, and his cattle?"

It was uncustomary for a woman to continue in conversation with a man at the well yet not unlawful. She is obviously intelligent and challenges his authority in Godly manners. He reveals further:

He clarifies that this life giving water shall be in you and emphasis it is everlasting. She now begins to realize he has transcended the material with spiritual and seeks to prove him.

He now proves to her his words are true by unveiling her personal life in detail in a visionary manner.

Here is where error in Western understanding of ancient Eastern custom has soured her reputation. All Eastern marriages were arranged except in Samaria. They observed courtship customs. The man in her life she was only courting but he is not yet her husband. She outlived five husbands and was simply courting another. No woman of bad reputation or harlot would be allowed to draw from the public well. She was intelligent, bold, and probably quite beautiful to have attracted so many husbands. Her life is about to change forever.

Their lives crossed for a purpose so she takes this opportunity to ask a question regarding worship and the proper way. Truly she wants to do right before God.

Wow! What a revelation, and given to this woman at the well. Centuries of idol worship, traditional ritual and even temporary sacrifices of the flesh were considered symbolic worship. Jesus reveals a sweeping change is going to come when all have received the same power of salvation contained in the one new gift of holy spirit by which we can worship God in truth and spirit. All other forms of worship are of the flesh. The Father was seeking such to worship him in the spirit since the beginning of time. That was to be the only true form that is spiritual and sanctioned by God. The gift of eternal life, the power from on high and the promise of the Father, came on the day of Pentecost as the outpouring of the Holy Spirit.

Acts 2:4
And they were all filled with holy spirit and began to speak in tongues as the Spirit gave them the utterance....and we do hear them speak the wonderful works of God.

1 Corinthians 12:3
...that no man can Really say that Jesus is my Lord except by speaking in the holy spirit.
(Amplified Version) . This is true worship. It is spiritual and true as Jesus said it would be.
Of all the spiritual manifestations that are mentioned in 1 Corinthians speaking in tongues is the only worship manifestation. It is the only one not available before the new birth. But now being born of God's spirit you can speak to him in your heavenly prayer language and God speaks to your spirit. God seeks such to worship him in truth and in spirit. Waving hands, lighting candles, dancing in the aisles may all be praise but the only true worship available according to God is speaking in tongues. All else is vain worship of the flesh.

Phil 3:3
For we worship God in the spirit and have no worship abilities in the flesh.

True worship is spiritual via speaking in tongues.

John 4:25
The woman now says to him " I know that Messiah is coming who is called Christ. When he is come he will tell us all things."

She had great knowledge and faith. The fact that she was a Samaritan, a woman, and courting a future husband made her no less in the eyes of God.

The first person Jesus openly declared he was the messiah was to a lone woman. The first person Jesus showed himself after the resurrection was a woman. Maybe God knows that this is how to spread the word faster. All kidding aside, it is God's way of magnifying the heart, not the flesh.
The woman was now ready to accept this marvelous man and spread the news to others.

John 4:27
And then came his disciples and marveled that he talked with the woman, yet no one questioned it.

They marveled not because he spoke to a woman of bad reputation but because he was speaking to a woman contrary to the custom that after asking for water he should not continue to talk in a public thoroughfare. If this woman had been living in sin he would've said " Forsake thy sin and follow me " as he did with others. He did not reproach her or rebuke her sins in anyway. In fact it was just the opposite. They crossed paths for a greater mission.

John 4:28-30
The woman left her water pot and went her way into the city, saying to the men " Come see a man who told me all things that I'd ever done. Is this not the Christ?" Then they went out of the city and came unto him.

A woman of ill repute could never have talked to the men this way nor would they have respected her calling.

John 4: 39
And many of the Samaritans of that city believed on him for the saying of the woman, who testified 'he told me everything I ever did'. And Jesus abode with them for two days and many more believed because of his own word. They said to the woman , "Now we believe not because of just your saying for we have heard him ourselves and know that he is indeed the Christ, the Savior of the world."

Mission accomplished. A woman written in the word forever and introduces the Savior of the world. She was a woman of great virtue and spiritual insight. She was the woman at the well.


* There is no article a. God is spirit. Also, in Leviticus 19;2 I the Lord your God am holy. God is holy and God is spirit. Truth and worship is by holy spirit.
** Then Jesus told her, "I am the messiah." New Living Translation.
"I am he, the one talking to you." New Century Version