The 12 Apostles Were All Filled 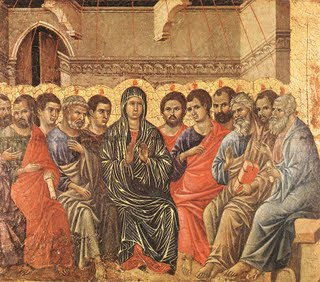 The book of Acts opens with the following introduction: The first account I composed, Theophilus, about all that Jesus began to do and teach, until the day when He was taken up to heaven, after He had via holy spirit given orders to the apostles whom He had chosen.

To these He also presented Himself alive after His suffering, by many convincing proofs, appearing to them over a period of forty days and speaking of the things concerning the kingdom of God. Gathering them together, He commanded them not to leave Jerusalem, but to wait for what the Father had promised, "Which," He said, "you heard of from Me; for John baptized with water, but you will be baptized with(in) the (no article the in text) holy spirit not many days from now."

Who is the object of the verb 'wait' for and 'will be' here? The 12 Apostles.* They were with Jesus Christ until the day which he ascended. He spoke to them of the things pertaining to the kingdom of God and gave them, the 12 Apostles, certain commandments regarding specifically receiving the gift of holy spirit. Not certain disciples but to the Apostles. We learned earlier time and place where they received. ** Now we’ll learn who.

After the ascension one of the Apostles, Judas, departed, so they had to replace him.

15. At this time Peter stood up in the midst of the brethren (a gathering of about one hundred and twenty persons was there together), and said, 16. "Brethren, the Scripture had to be fulfilled, which the Holy Spirit foretold by the mouth of David concerning Judas, who became a guide to those who arrested Jesus.

Here, Peter is addressing about 120 disciples regarding filling the position Judas left vacant after the ascension. Peter and the others narrow it down to two.

21. "Therefore it is necessary that of the men who have accompanied us all the time that the Lord Jesus went in and out among us-- 22. Beginning with the baptism of John until the day that He was taken up from us--one of these must become a witness with us of His resurrection." 23. So they put forward two men, Joseph called Barsabbas (who was also called Justus), and Matthias. 24. And they prayed and said, "You, Lord, who know the hearts of all men, show which one of these two You have chosen 25. to occupy this ministry and apostleship from which Judas turned aside to go to his own place." 26. And they drew lots for them, and the lot fell to Matthias; and he was added to the eleven apostles.

Now we have 12 Apostles again before the Day of Pentecost. After the experience of the outpouring of holy spirit in the temple in Jerusalem, it states the following:

But Peter, standing up with the eleven, lifted up his voice, and said unto them, Ye men of Judaea, and all ye that dwell at Jerusalem, be this known unto you, and hearken to my words:

Peter plus eleven make twelve Apostles who originally received the outpouring on the Day of Pentecost.

When you follow the word grammatically and accurately ”they” refers to twelve Apostles not “about 120 disciples.” This is also confirmed by the crowd that heard them:

And they were all amazed and marveled, saying one to another, Behold, are not all these which speak Galilaeans?

Again, God’s checks and balances confirms the truth of the word for the Apostles were all Galilaeans. It was the twelve Apostles who received and were filled with holy spirit and spoke in tongues in the temple that day that changed the world. Not 120 disciples in an upper room.

**see In The Temple At Pentecost