In The Temple At Pentecost 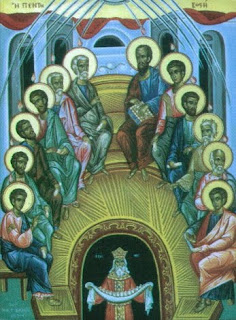 The Day of Pentecost is one of the most pivotal records in the Bible. It is also the most misunderstood event in all the word resulting in confusion and error regarding the entire field of the holy spirit.

Some who are reading this are already confused as to why I’m not using capital letters for holy spirit. The who, when, what, where and why of the gift of holy spirit is truly enlightening and experientially powerful when accurately taught and practiced. When wrongly taught and practiced it has become very divisive, even to the point of dividing denominations and families.

This teaching is to dispel one very simple myth, that the outpouring of holy spirit and resulting in speaking in tongues on The Day Of Pentecost took place in an upper room. This is simply not true. It was in the temple at the hour of prayer.

Jesus told them in Luke and Acts to tarry in Jerusalem until they be endued with power from on high in not many days. We now know it was ten days and totaled 50 from the day of the resurrection which also happens to be the time (pente means 50) between the two feasts of Passover and Pentecost.

When they had entered the city, they went up to the upper room where they were staying; that is, Peter and John and James and Andrew, Philip and Thomas, Bartholomew and Matthew, James the son of Alphaeus, and Simon the Zealot, and Judas the son of James.

This upper room is where they were staying, where they abode. Notice, it mentions only the names of men. Women were not allowed to “stay” or “abode” with men. Secondly, they were Galileans and were not permitted to stay within the city limits of Jerusalem. Therefore, the upper room was outside the city and away from the crowd that had gathered for the Feast of Pentecost.* There was ten days between the events in chapter one and chapter two that begins with …”And when the day of Pentecost was fully come”, which separates the upper room by time. Now let’s look at time and place.

And they, after worshiping Him, returned to Jerusalem with great joy, and were continually in the temple praising God.

"For these men are not drunk, as you suppose, for it is only the third hour of the day.

There were several periods of the day devoted to prayer called the hour of prayer. This was one of them. It was 9 AM. Peter stood up in front of a crowd, which would’ve been gathered at the temple, not by the upper room at the hour of prayer.

And suddenly there came from heaven a noise like a violent rushing wind, and it filled the whole house where they were sitting.

The house was also referred to as the temple. The temple was the house of prayer.

And He began to teach and say to them, "Is it not written, `MY HOUSE SHALL BE CALLED A HOUSE OF PRAYER FOR ALL THE NATIONS'? But you have made it a ROBBERS' DEN."

The Greek word for house here is the same as house in Acts. It is a different word for upper room.

God glorified his promise in front of thousands to see, not in a hidden corner in an upper room. For after they heard this miraculous experience the people pleaded with Peter “ What shall we do?” Those who believed followed his command and thousands were saved which became the birth of the church, the first fruits, the body of believers, which is now the temple of God. Not the upper room of God. How magnificently symbolic that this occurred in God’s temple and was during the feast celebrating the first fruits of harvest.

* The Feast of Weeks or Pentecost was one of the three feasts that occurred in Jerusalem each year. It was a celebration of thebfirstfruits of God’s harvest. It was also required that all males of age attend.